July 23, 2010
IndiaToday:
College and university students will now be able to buy a computer at an unbelievable price of $35 (approximately rupees 1,600). Possibly the cheapest computer in the world, this tablet PC weighs 400 grams and has all the applications available on a regular computer. 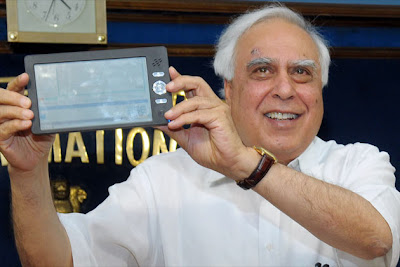 The pc was unveiled by Union Human Resource Development Minister Kapil Sibal in the Capital on Thursday. It's a touch-screen device and is wi-fi enabled for Internet access.

Developed by the research teams of the Indian Institutes of Technology (IITs)-mainly IIT-Rajasthan and IIT-Kanpur-this tablet PC has 256 random-access memory (RAM). It is powered by a 2-watt system to suit poor power supply areas and has alternative battery support through solar cells.

The minister said he expected that the prices would go down to rupees 1,000 ($20) and drop to rupees 500 ($10) as more innovations are introduced. "This is real and tangible and we will take it forward," Sibal said. The device, which has a seven-inch diagonal screen, has an inbuilt processor and is easily portable. It can be connected to a keyboard through the USB port.

Significantly, the device has no hard disk and instead makes use of a memory disc of 2 GB. So, just as in a digital camera, the storage capacity can be enhanced by inserting a higher memory disc. It can also be connected to an external hard disk of 32 GB. "What we have indigenously designed is a personalised device, which is also the cheapest in the world, offering all regular applications," a senior official of the National Mission on Education through ICT (NMEICT) said.

Students will have access to Microsoft-equivalent applications of Word, Office, Power Point etc. Instead of Windows, it will offer the open-source Linux operating system, thereby keeping costs in check. Targeting institutions as the first beneficiaries of this device, the government has decided to subsidise it by funding half the cost, i.e., rupees 750.

The HRD ministry has invited private players to innovate and further bring down the costs.

"When we started the project, the response from the private sector was lukewarm. Now many are willing to join the innovation," Sibal said.

The NMEICT is also developing high quality e-content free of cost for students and institutions.

In the meantime, the government is providing broadband connectivity to institutions.

About 8,500 colleges in the country have already been connected. The challenge before the government now is to put in place the delivery lines for these devices.