Lets visualize your web pages in 3D with Firefox

Tilt is a Firefox addon that lets you visualize any web page in 3D. A new update is available, coming with more developer-oriented features. Try the addon.

To start Tilt hit the CTRL+SHIFT+M or go to Web Developer > Tilt in the tools menu. :) 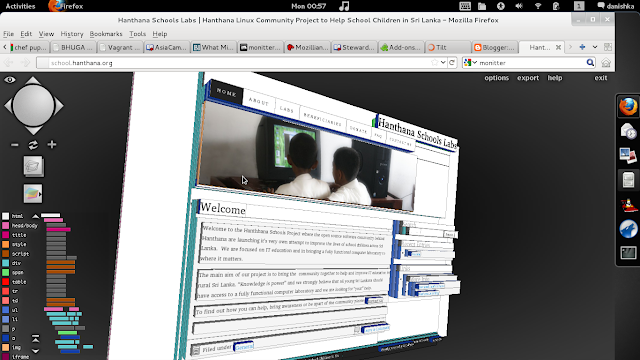 Since the first alpha version of Tilt was announced (a Firefox extension focused on creating a 3D visualization of a webpage), a lot of work has been done to add a great number of developer-oriented features. These focus on debugging the structure of a webpage, inspecting styling and attributes for each node and seamlessly refreshing the visualization when the DOM structure changes or after contents of document are repainted.

Tilt is useful when searching problems in the HTML structure (like finding unclosed DIV elements for example) by providing the extra third dimension, layering each node based on nesting in the DOM tree. Stacks of elements visually represent branches in the DOM, and each node can be inspected for the inner HTML contents, its computed CSS style and the attributes.
Clicking anywhere on the visualization highlights a color-coded rectangle surrounding the corresponding node. Double click shows up the source preview for that node. Tilt also tries to show the most relevant information when needed (one is most likely to inspect the attributes of an input, button or image element, for example, but can easily switch between HTML, CSS and attributes view at any time).